Wheal Martyn are delighted to present an exhibition by contemporary artist Kurt Jackson, influenced by his artist-in-residence at Littlejohns China Clay Works. Kurt’s work is fuelled by a long standing interest in Cornwall’s extractive industry and its role in shaping the physical landscape, culture and heritage of Cornwall; over the last 20 years, he has explored the geological workplace as a source for making art.

For this project, Kurt worked in situ at the clay works, observing the workers in the pit as they extracted and transported the china clay in an extraordinary manmade landscape. The dramatic (and sometimes extreme) variations in the weather inspired a diverse range of drawings and paintings, perched on the edge of the pit or down in the depths – including the clay and stone itself in the mix.

The exhibition includes new mixed media paintings, from huge tarpaulin-sized canvases to small intimate studies as well as a number of ceramic pieces. The subject matter ranges from the ‘washing’ of the clay with high pressure monitors, to the blasting of the rock and breaking and transportation.

A dedicated environmentalist and true polymath, Kurt’s holistic approach to his subject seamlessly blends art and politics, providing a springboard to create a hugely varied body of work unconstrained by format or scale. Kurt’s practice ranges from his trademark visceral plein-air sessions to studio work and embraces an extensive range of materials and techniques, including mixed media, large canvases, print-making and sculpture.

Kurt Jackson was born in Dorset in 1961, the son of artists. On gaining his zoology degree at Oxford University, he travelled extensively, painting wherever he went, before putting down roots in Cornwall with his wife Caroline in 1984. Kurt’s focus on the complexity, diversity and fragility of the natural world has led to artist in-residencies on the Greenpeace ship Esperanza, the Eden Project and for nearly 20 years, Glastonbury Festival, which has become a staple of his annual working calendar.

The world leader in mineral-based specialties for industry. 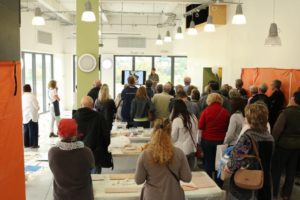 Practical ceramic demonstrations for festival goers to learn a little bit about potters process and the skills and techniques involved.