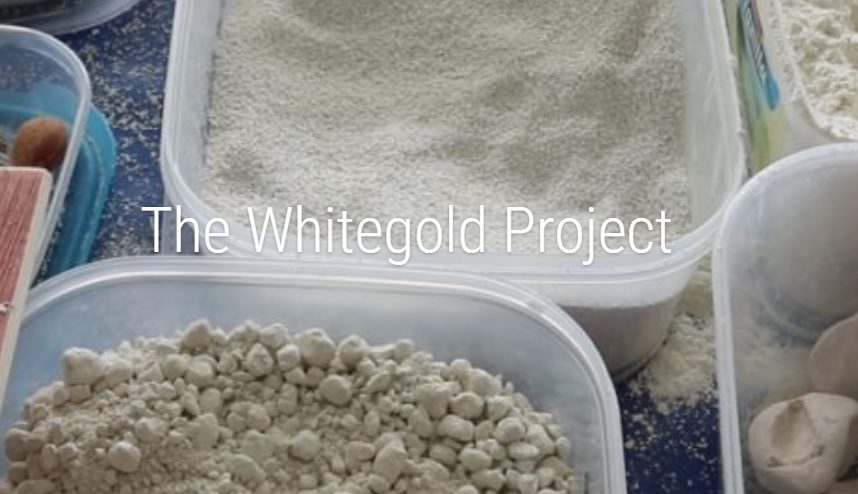 As featured in the The Jan/Feb edition of the Ceramic Review and on the shelves from December 9th 2019. The lucky winners of the first ever Austell Project: Whitegold International Ceramics Prize.

The prizes have new names relating to the minerals that give us china clay:

China clay fact: this quartz with a rose pink blush of iron oxide is what gives us the distinctive pink pages of the Financial Times

Neil Brownsword and Tana West are the winners of the first Whitegold International Ceramic Prize.

The new prize – which is worth over £20,000 – is a celebration of the relationship between clay and culture. The winners will each create a new piece of work drawing on the history and culture of St Austell, the UK home of china clay.

The Prize is part of the Whitegold Project, a new initiative set in the heart of Cornwall, which aims to create art, craft and design inspired by the area’s industrial and post-industrial landscape and its global china clay connections.

The winners were selected from the following shortlist of artists who were recognised by the jury for their outstanding ceramic practices that connect people, culture and place:

The Whitegold jurors were:

Quartz Award
Neil Brownsword will receive £10,000 plus £5,000 to produce a new piece of artwork for St Austell.

Through film, installation and public interaction, Neil Brownsword’s proposed project will explore the intimate connections that exist between the entangled histories of St Austell and Stoke-on-Trent.

For more than two centuries, the industrial histories of the two places have been intertwined through the traditions of china clay production and ceramics. Both regions bear within their landscape the physical effects of industry, and recent economic and social transitions due to global competition and the outsourcing of skilled labour.

Brownsword aims to reconnect audiences to the physicality of raw materials, their geological origins and wider cultural contexts, together with systems of labour, tools and technologies that helped to define the success of these industrial regions.

“I’m fascinated by these two industries; their parallel connection to clay as a material, and the ‘alchemic’ processes that turns this inert matter into objects which enhance our daily lives. Through this project, I will draw upon a range of historic tools associated ceramic production and clay extraction, to reanimate actions and forgotten processes. As the digital continues to revolutionise production, the ‘knowledge of the hand’ is becoming increasingly lost. I’m hoping to reassign a sense of value to these more traditional systems of knowledge back into contemporary consciousness.”

“Communities were established around these industries – livelihoods were built on the extraction and transformation of raw materials. As they have downsized in recent decades, there exists a sense of detachment from these histories. I want to explore new ways to reactivate connections that have shaped the identity of place, through artistic process and participation.”

Brownsword will create a multi-media installation that draws on these physical environments and the obscure aesthetics of the production processes. An interactive element of the project will encourage people to creatively explore clay in its raw states and celebrate these histories in new and unexpected ways.

West aims to construct a large circular panorama inspired by clay country. Her inspiration came from the panoramic wallpaper that hung in the White Hart Hotel in St Austell when it opened in 1822. The scene depicted the Bay of Naples, reflecting the prosperity and global links of the early traders in china clay. The wallpaper was made by Dufour and Sons and was donated to the Victoria and Albert Museum in the 1930s.

West’s new panorama will be made up of a number of panels created from local clay made to resemble wallpaper. She will open conversations with local people through informal activities such as workshops and walks. Through these conversations, she will gather ideas for important landmarks to include in the scene.

“China clay is important for its use in ceramics, but I was interested to learn that the majority of it is used in the paper industry. Through my research for this project, I came across an account of the wallpaper which hung in the White Hart Hotel.

“I’m interested in how local materials create a particular effect that is special to that place. For example, the original pink hue of the Financial Times newspaper came from the unbleached china clay from Bodelva Pit. Lots of English 19th century wallpapers used mica – a by-product of china clay extraction – to achieve a lustre effect.

“When it was created, the original panorama was the height of fashion and depicted St Austell as the bustling growth town it was then. I want to use this pre-cinema idea of the spectacle to create a panorama of the things that are important about this place for people today. I will gather ideas through their stories – when someone tells you a story about something it will seep into what you’re doing.”

“The Whitegold Prize brings internationally recognised artists to the region to develop new work with local community at its heart. The two prize winners were selected from a very strong shortlist by an experienced team of jurors. We’re looking forward to seeing how the artists’ ideas develop over the coming months, and how the local community respond to this creative exploration of the area’s industrial past.”

The winning artists are currently working with Whitegold curators to develop the fine detail of their proposals. The work created will be part of the Whitegold Festival on 19 September 2020.

The Whitegold Project is a new initiative set in the heart of Cornwall, in an area famous for China Clay production and renowned for the surrounding sub-tropical gardens.

The Whitegold Project is part of the Austell Project which aims to enhance the landscape, transform spaces and stimulate sustainable economic growth by attracting new visitors, new residents and new investment, promoting pride in the local community.

The Coastal Communities Fund awarded St Austell a £1 million contribution to transform the St Austell area as a visitor destination. The funding will support St Austell becoming a Green and Ceramic Cultural Centre including a programme of public realm cultural initiatives and events and skills training, to benefit residents and attract more visitors.

The first Whitegold International Ceramic Prize is a celebration of clay in relationship with people, culture and place. The winners of the prize have been invited to make a new piece of work drawing on the history and culture of St Austell’s industrial and post-industrial landscape and its global china clay connections.

Artists, collectives and CIC’s from around the world were invited to submit works that use clay to inspire new perspectives and insights into place – the specific character of a location that makes it unique.

The Whitegold Ceramic Prize is an award in two parts. Winners will receive a cash prize, along with a paid commission for the development of a new work for St Austell.

For all the details about the Whitegold International Ceramics Prize; the Winners, the Whitegold Festival and Brickfield then click to our news section here or follow the Whitegold website.